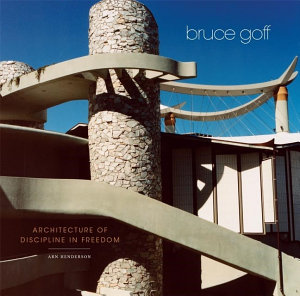 Renowned today as one of the most important architects of the twentieth century, Bruce Goff (1904–1982) was only twelve years old when a Tulsa architectural firm took him on as an apprentice. Throughout his career he defied expectations, not only as a designer of innovative buildings but also as a gifted educator and painter. This beautifully illustrated volume, featuring more than 150 photographs, architectural drawings, and color plates, explores the vast multitude of ideas and themes that influenced Goff’s work. Tracing what he calls Goff’s “path of originality,” Arn Henderson begins by describing two of Goff’s earliest and most significant influences: the architect Frank Lloyd Wright and the French composer Claude Debussy. As Henderson explains, Goff embraced from a young age Wright’s ideal of organic expression, where all elements of a building’s design are integrated into a unified whole. Although Goff’s stylistic dependence on Wright eventually waned, the music of Debussy, with its qualities of mystery and “discipline in freedom,” was a perpetual source of inspiration. Henderson also emphasizes Goff’s identification with the American West, particularly Oklahoma, where he developed most of his ideas and created many of his masterful buildings. Goff served as a professor at the University of Oklahoma between 1947 and 1955, becoming the first chair of its School of Architecture. The new studio course he introduced was a pivotal development, ensuring that his ideas were imparted to the next generation of architects. Part biography of a well-known architect, part analysis of Goff’s work, this book is also a finely woven tapestry of information and interpretation that encompasses the ideas and experiences that shaped Goff’s artistic vision over his lifetime. Based on scores of interviews with Goff’s associates and former students, as well as the author’s firsthand study of Goff’s extant buildings, this volume deepens our appreciation of the great architect’s lasting legacy.